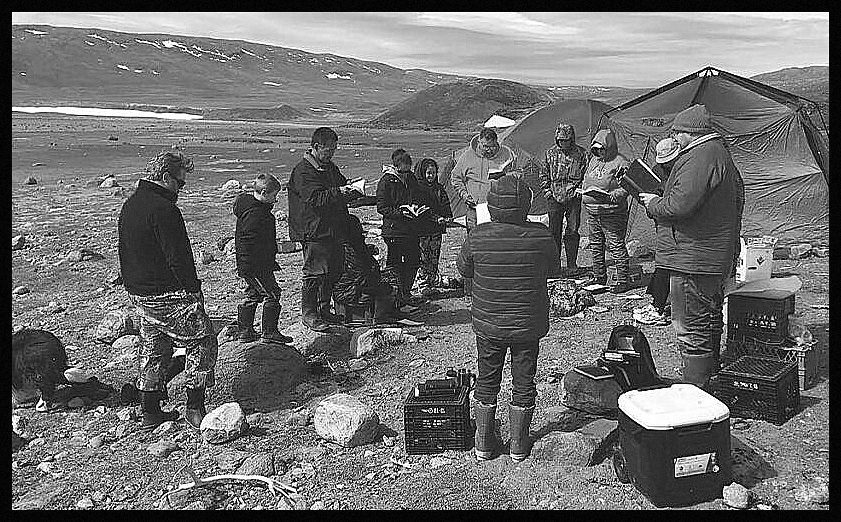 "Worship in the Arctic"

Eucharist:
'Come & Meet The Risen Christ, for We Are His Body'

The disciples did not have a supper and invite Jesus.

Christ says, “I am having a supper, and I invite you to come.”

Eucharist is not something to which we invite Jesus. It is the Lord’s Supper. This is Christ’s meal. We do not come to offer something to Him. We come because He offers something to us.

The Eucharist has been central to my practice of the faith since as long as I can remember and it is still something that sustains me, encourages and inspires me. Whether gathered with one or two others in someone’s kitchen, or in Canterbury Cathedral with 700 others, I come because I have been invited, and it has never occurred to me to question the motives of anyone else who might have responded to that same invitation.

Some of the most profound experiences of Eucharist have been where the most unlikely people have responded to the invitation, and kneel or stand side by side with hands extended to receive holy communion.

In Darwin, it was not uncommon for a Supreme Court judge to stand alongside an itinerant First Nations person and an Iranian asylum seeker, for a small child to stand next to a foreign tourist, all responding to Christ’s invitation 'to come'.

So, I was deeply saddened when a group of bishops at the Lambeth conference announced yesterday, that they would not be coming forward to receive holy communion in Canterbury Cathedral “alongside gay-partnered bishops, and those who endorse same-sex unions.”

Their statement continued, “They shall remain seated…This will be the first of a number of ‘visual differentials’ as we move forward from the conference. Today, in Canterbury, we may be ‘gathered together’ but we most certainly cannot ‘walk together’ until provinces which have gone against Scripture repent and return to orthodoxy.”

It breaks my heart that the Eucharist, so important to me, has been weaponised and used this way.

My hope for the Lambeth Conference was that we might find, and celebrate, those things we hold in common, begin to understand where we think differently, and come together day by day to break bread around Christ’s table.

When Jesus invites us, he says “Come as you are.”

If we all had to measure up before receiving holy communion none of us would be able to.

If I had to be sure everyone else in the congregation measured up before I received holy communion, I would never be able to receive.

Ironically the very next thing on the conference programme was the traditional Conference photo – for which everyone was present!

Come, not because any goodness of your own gives you a right to come, but because you need mercy and help.

Come, because you love the Lord a little and would like to love him more.

Come, because he loved you and gave himself for you.

Come and meet the risen Christ, for we are his Body.”